Clare West (photographer and lover of flowers – great combo) was with us again last month, you can see her blog post about what we are up to in the garden here.

I thought it would be an ideal opportunity to record the picking and making of our new ‘All of the Garden‘ bouquets. They are exactly what they describe – everything that is in flower that week gathered into a gorgeous garden bouquet.

We started in the field by picking my favourite Narcissi variety ‘Geranium’ – wonderful scent and a good stem length for hand tied bouquets. 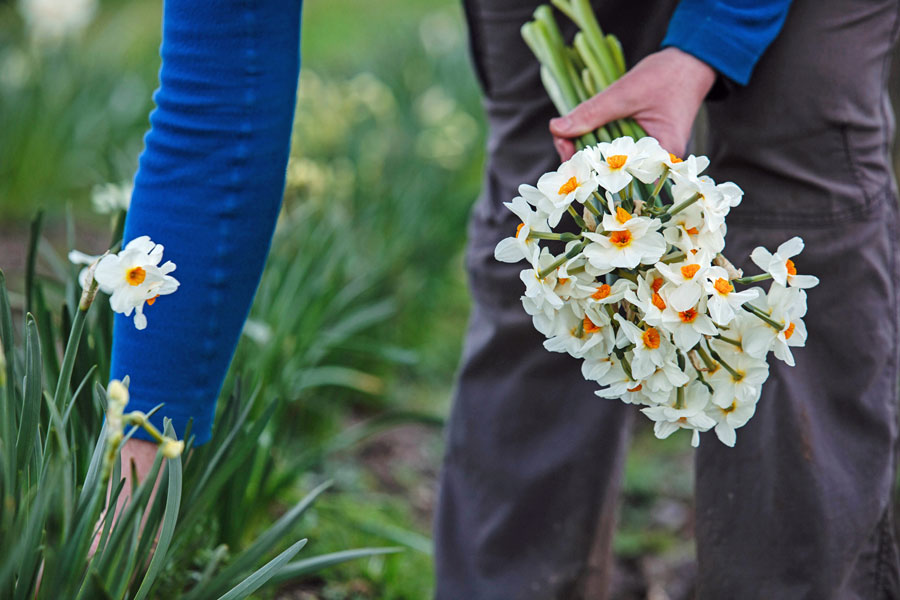 Next it was in to the polytunnel to pull a few tulips, this one is a lily-flowered variety called ‘Purple Dream’. People are always alarmed to see me pulling the whole tulip out of the ground and snipping off the bulb. We treat them as annuals so that harvesting and clearing the ground for the next crop is done in one go. The bulbs are composted and I get to choose new varieties for the following year. 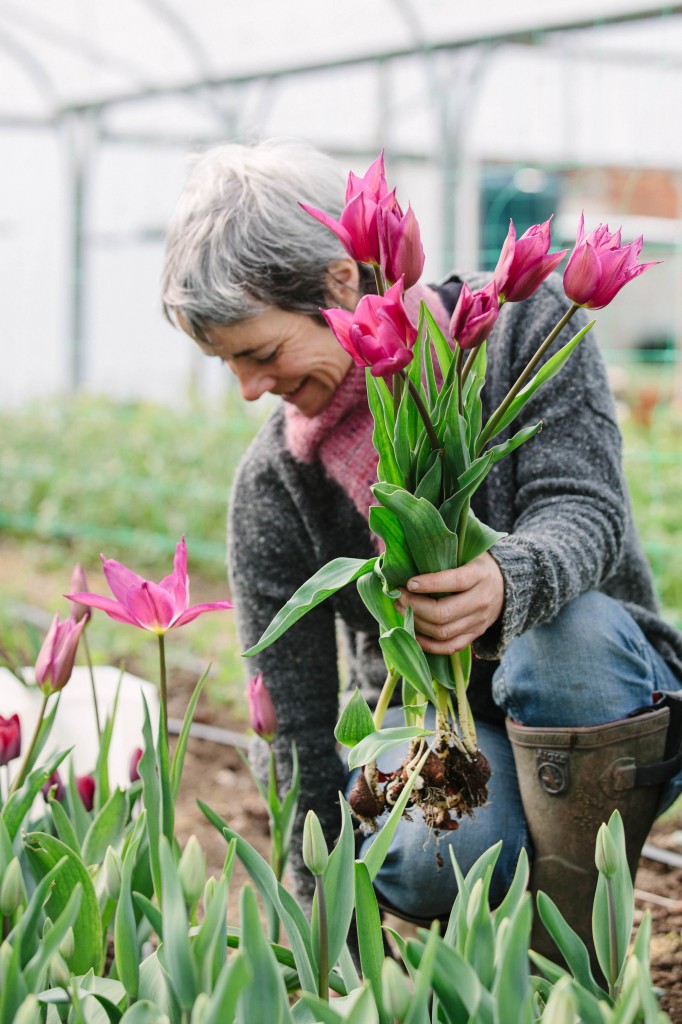 Once everything is picked, it is off to the flower studio to assemble my bounty. 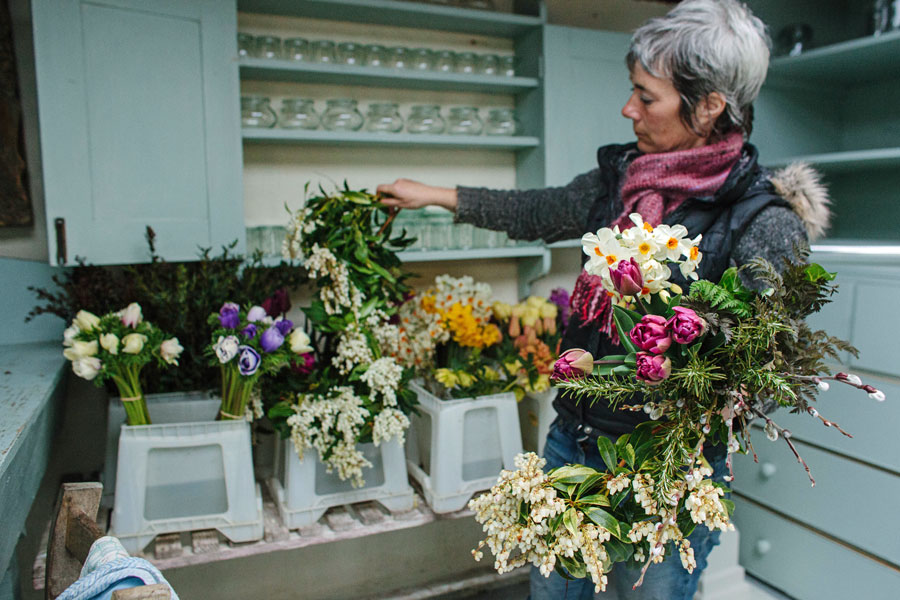 All the flowers and foliage are stripped of lower leaves and laid out in piles on the table. The more variety of materials the more textured and natural it will look, ideally I like to use about twelve. Here I am using (from left clockwise) Anthriscus ‘Ravenswing’, Eucalyptus parvifolia, Rosemary, Pussy Willow, Tulips ‘Blue Diamond’ and ‘Apricot Beauty’, Hellebore ‘Harvington Double Yellow’, Pieris, Anemones ‘Galilee Pastel Mix’, Arum italicum and Narcissi ‘Geranium’. 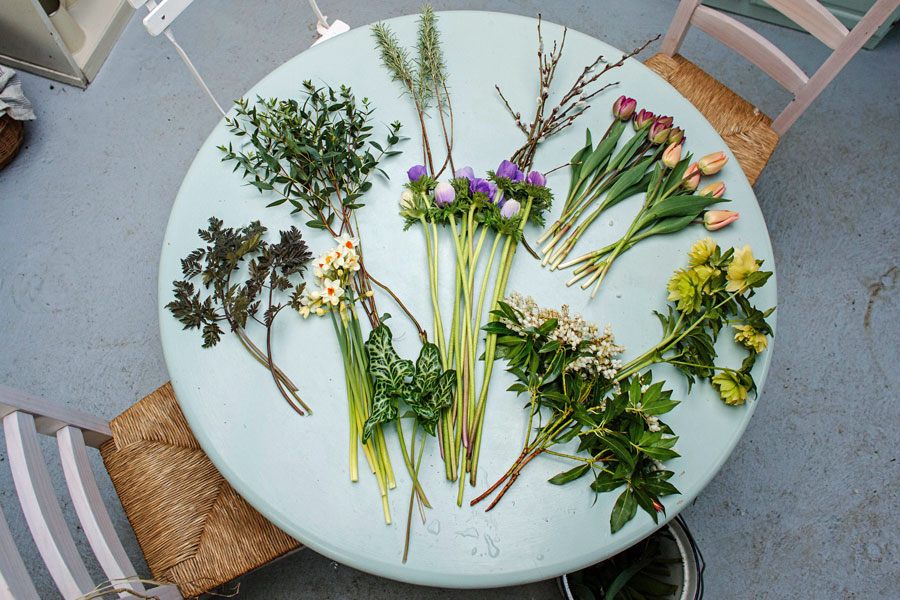 Now I flex my hand muscles and get to work, I will keep going until everything on the table is used. 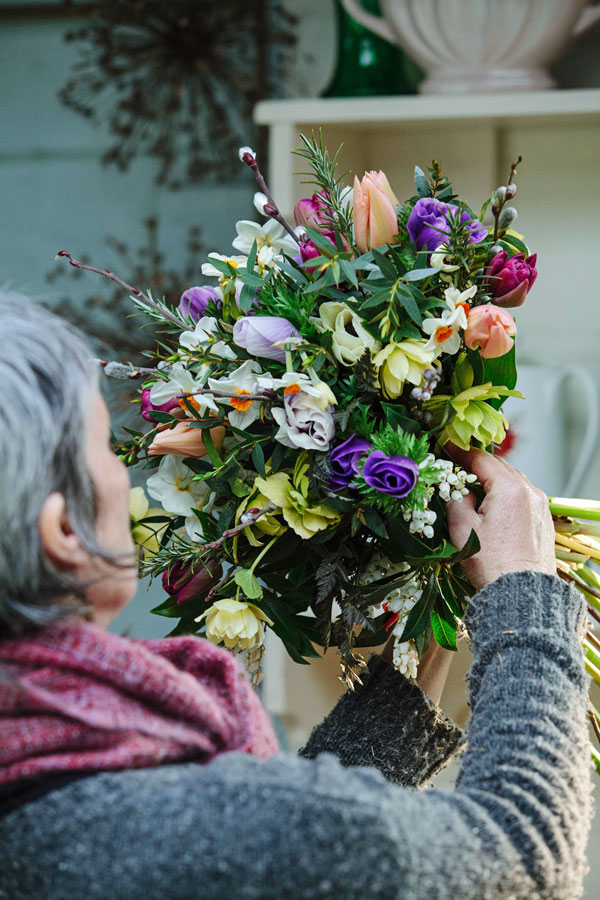 The bouquet is tied off with raffia and will be aquapacked and placed into one of our specially designed transit boxes. Off for next day delivery to one lucky recipient! You can order one of our mail order bouquets here. 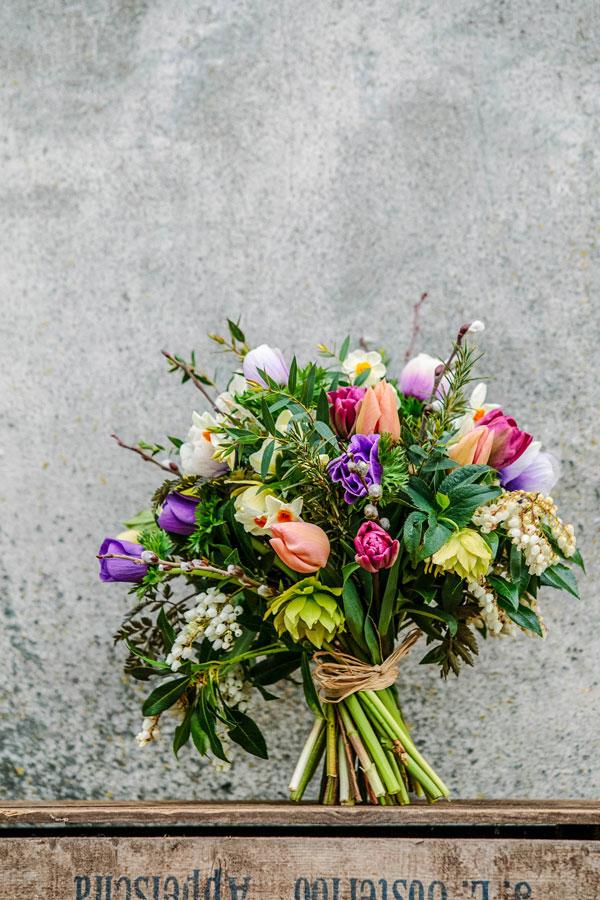 By greenandgorgeous on January 25, 2013 in Polytunnels, Tulips It has been lovely to be back in my studio arranging flowers. I have spent a lot of time over the winter months at my laptop designing weddings and preparing quotes. I have been talking about flowers for months and finally I’ve been let loose.

The last two weddings have been a mixture of pinks and blues. I have mainly been working with anemones, ranunculus, narcissi, tulips and muscari.

The spring flowers are quite challenging to arrange due to their fleshy stems. They are often heavy headed and don’t like being in oasis. I think tulips have the most diva-like tendencies. They take a lot of careful handling and then once I’ve finished arranging after a few hours they’ve moved and pleased themselves anyway. Like true divas though, they know they are worth all the fuss!

I’ve really enjoyed working with the muscari this year. The stems have been long and the graded blue heads have offered a delicacy to the palette. They are a fabulous bridal flower to use as they last well out of water, making them great for hair flowers and button holes. Here is a flower crown created with muscari and lily of the valley. Here it is again mixed with narcissi and viburnum for a corsage and used with lily of the valley to create a hair clip: The anemones have been amazing this year. The fully open heads have been so huge a couple of people have mistaken them for oriental poppies! The stems have been straight and long, perfect for constructing a hand tie bouquet. It’s always fun to do something big and bold. For last weeks wedding we created three flower balls. I used a base of choisia and viburnum then added ranunculus, anemones, solomons seal and scilla. We also used some magnolia from the family’s garden. They certainly made an impact! At the other end of the floristry scale, just a few stems in a bud vase can be heavenly too. Simple, natural and beautiful.