By greenandgorgeous on February 9, 2015 in Blog, Cut flowers, Polytunnels

After an article in the Organic Grower last year I started dreaming of more protected cropping and I started talking to Haygrove Polytunnels. I had never approached them before as I thought they would be way too expensive, but I was proved wrong and wish I had done so earlier.

Their range, specification and technical info is impressive, and it’s all built on the direct experience they have with fruit growing all over the world. The caterpillar tunnel I have had for 2 seasons has been great, but I had to take it down for most of last winter as it was so so stormy. At 20mph winds the caterpillar looked like it had a life of its own and was going to turn into some kind of winter moth and fly away. 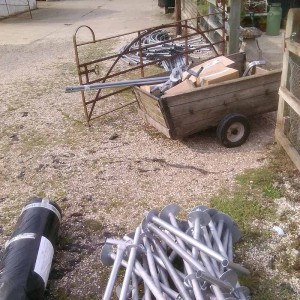 Moving all the metalwork took a while 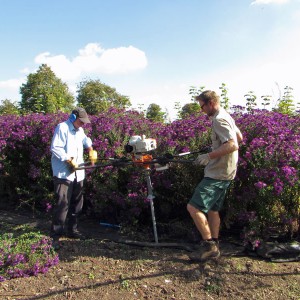 So the Super Solo tunnel I have opted for (NB., other profiles are available!)  is 26m long, 8.5m wide and cost £2500. That includes a metal top bar along the entire length, additional bracing (windy kit) and roller doors. It has some straight profile at the edges (essential if you want to use all the space) and the potential for some major ventilation come summertime. As you can see, it’s like a Spanish tunnel that goes down to the ground, but is roped up the same way. 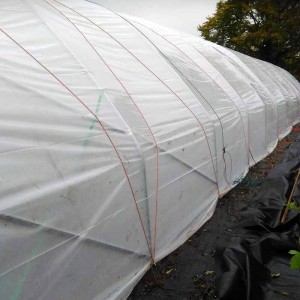 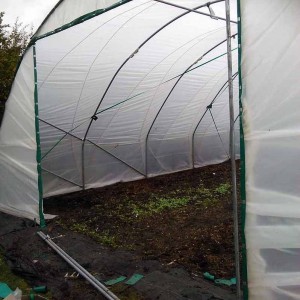 I did have to borrow my Dad for half a day to screw in the ground anchors (70 0mm) with a hired auger, but apart from that it was straighforward enough for one person to do. I even skinned it myself when I could see a quiet day forecast, although it would be much more preferable with more. It therefore has some great advantages in cost (no concrete or timber or outside contractors), probably some planning advantages as it is clearly a temporary structure, it can be closed down for the worst of the winter (spring bulbs!) and still grow summer crops because of the ventilation. I estimate it is probably 4-5 times cheaper than a twinspan polytunnel covering that size, all things considered. 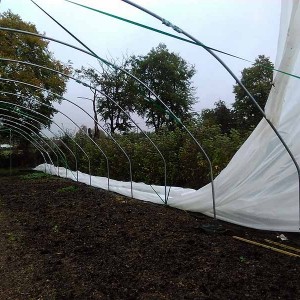 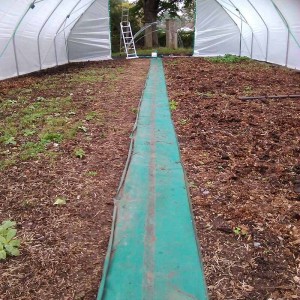 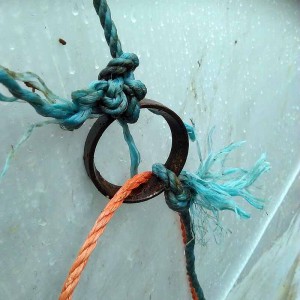 The handy see-saw ring for roping up, definitely easier with two..

The only slight niggle is with the plastic for the doors, which tends to billow in a bit in windy weather, due to the enormous tractor access opening. Haygrove do sell a stiffer door material which I would well recommend getting delivered with everything else. Their instructions, manuals, technical information and after sales support were all really good, you can find them on the world wide web of wonder here www.haygrove.co.uk.

By greenandgorgeous on March 10, 2013 in Anemones, Cut flowers, Polytunnels

Mother's Day is always rather
frustrating, especially when it comes early and the flowers are late.
A missed opportunity for British flower growers I think. If only we
could change it to a Sunday in June.

Anyway, I decided to rise to the
challenge and create a bouquet with only what is flowering in our
cutting gardens, bearing in mind that I am lucky to have an unheated
polytunnel for some of our spring bulbs. The bouquet contains a beautiful
selection of hellebores with rich, intense colours (specially bred by
Hugh Nunn of Harvington Hellebores) these match up well to the jewel-like
anemones. For foliage, I had rosemary, arum leaf and pussy willow. 1
By greenandgorgeous on January 25, 2013 in Polytunnels, Tulips