By greenandgorgeous on November 24, 2019 in Blog, composting, machinery

It’s been that busy time clearing the remains of the flowering season and trying to get things put to bed for the winter. Doing this properly will save you time and effort both now and next season, as well as getting the soil in the best place for growing next year. 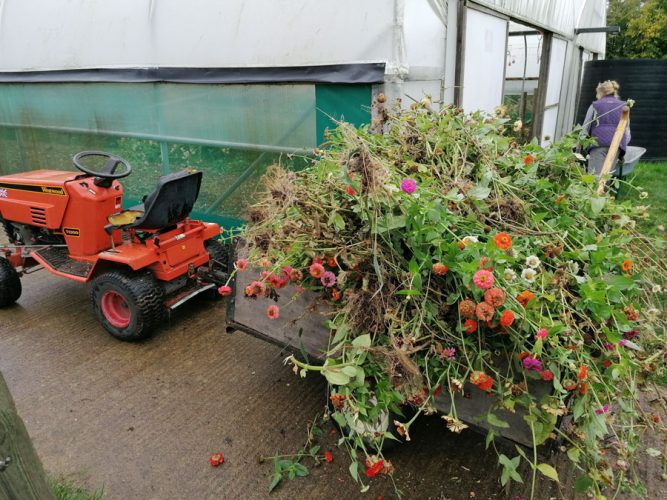 ZINNIA TUNNEL CROPS – LOTS OF BIOMASS TO DEAL WITH

First things first, do you need to? It is always better to have something growing or covering the soil. The soil around roots is the most biologically active part so clearing and composting old crops is never as good as letting them rot down in situ. This is where a ride on mower can be rather handy or a strimmer if not, or it if is too wet. A hedge trimmer is also useful to separate out staking and support netting by cutting above and below. Tunnel crops are always coming out to make room for the next course and so will need composting on your heap. 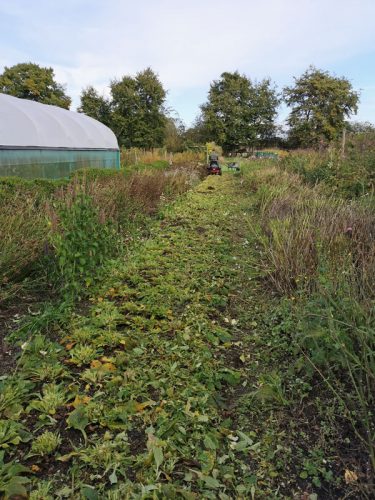 MOWING OFF WITH A RIDE ON MOWER

If you have been using mypex or membrane to grow your annuals/biannuals in, you shouldn’t have too many weeds and so you can let the mypex cover and protect the soil, let the remaining flowers rot down over the winter and you can get on with something else (an easy decision to make as the weather deteriorates). If you haven’t used mypex or ground cover then you will probably have more weeds and want to strim/clear and cover.

All that organic matter can be left to decompose over the winter, preferably covered with mypex or black plastic to prevent weeds growing and allow worms to move up to the surface freely. An alternative to covering with plastic is a liberal and generous mulch of something sterile, green waste, DIY compost (if you made it well!) or even straw. Anything to stop the winter rain trashing the soil and to prevent excessive soil leaching. You will need considerable amounts though, in order to stop light getting to any leftover weeds. 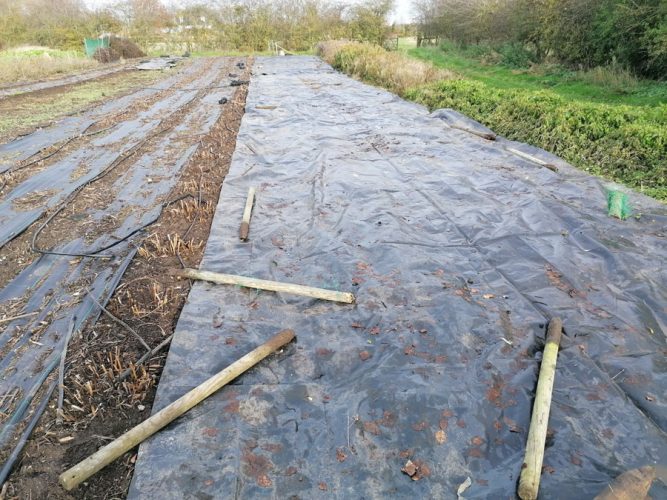 BLACK PLASTIC AND LOTS OF WEIGHTS – IT’S A GOOD LOOK 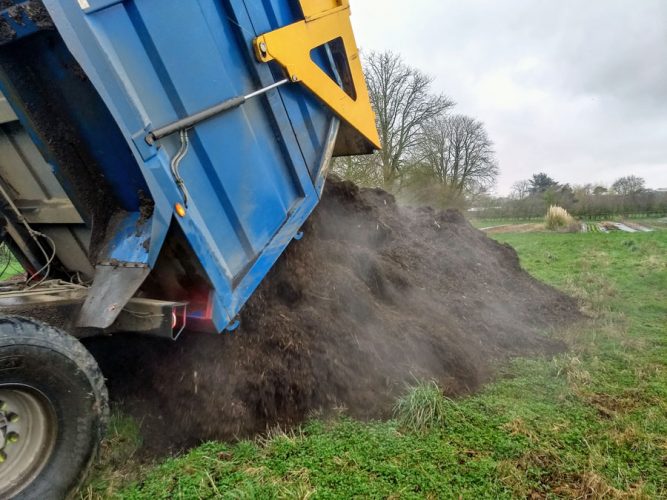 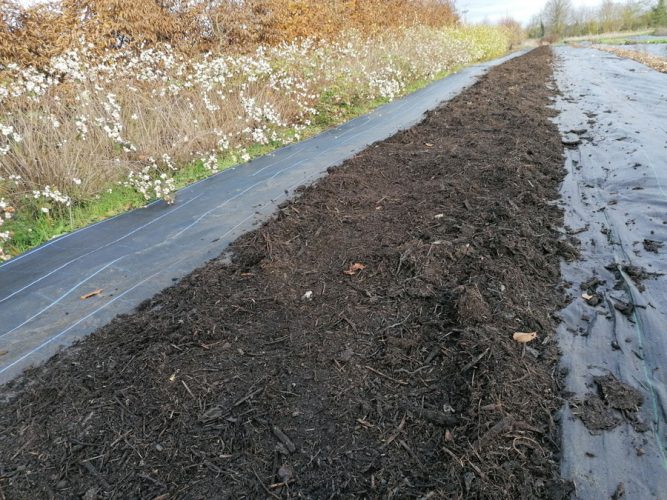 If soil temperatures are still warm enough, Sept or possibly early October you can try and get some mustard established as a winter cover crop. Depending on where you live and the severity of the winter this may not make it through to Spring but will have suppressed weeds and donated lots of organic matter to the soil before it expires. A rye/vetch mix is also an option here, if you don’t need the soil for early crops, as it will add more organic matter and N, and really keep weeds out of the picture. 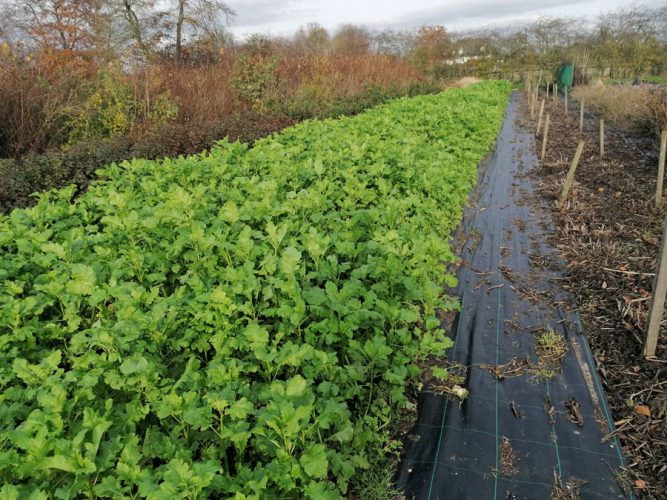 Everyone has their own take on this and it’s a really important part of recycling fertility and physically dealing with all the material you will be producing, especially from covered cropping. Here are a few pointers for flower growers, especially if you are newbies or have not been producing anything resembling the crumbly, friable, sweet smelling goodness that everyone else always seems to manage to. 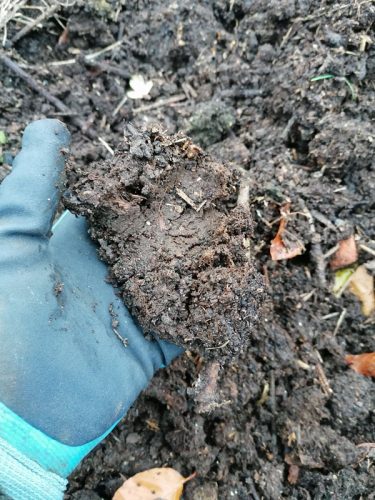 The first issue is that of the Nitrogen : Carbon ratio (or ‘greens’ vs. ‘browns’ in old allotment speak). Our heaps of flower farm waste are going to be simply too woody to really break down properly and so will need some amending. Ideally with something wetter, greener and with more Nitrogen than all those woody stems – like the veg waste from your kitchen but in larger amounts. Practically this means some sort of manure to be mixed in at regular intervals, we use chicken manure, horse manure (ideally without bedding) or fresh digestate (from a digester). This added Nitrogen will allow the first set of microbes to multiply rapidly and start to heat up the heap.

Secondly, most of our cleared material is bulky and will need physically breaking down before it can decompose properly. This can mean shredding (although I only manage this once or twice a year) or usually hedge trimming larger stuff with considerable stems. At any one time I typically have a pile of waste next to the pile to be added once cut up or weathered for a few months. Too much bulky material will lead to large air pockets and dry heaps that won’t decompose. Shredding really eats through all those piles of stuff, turbocharges the entire process with all that extra surface area for microbes to work on and may be an important factor if you don’t have much space for your heaps. 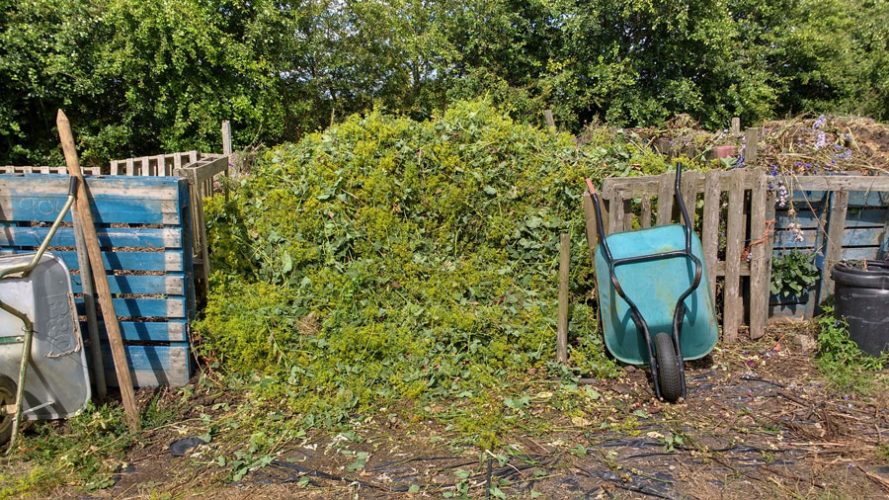 MAY NOT BE THE PRETTIEST PART OF YOUR FLOWER PATCH (but the blue Europallets are the best..)

Practically, compost heaps made of pallets work really well – they will need some serious bracing or they can also be made of straw bales if they are easily available. I have 3 heaps (3 -4 pallets along each side) so that I can leave them for 12-18 months with no mixing- I just walk/jump on them to pack them down after adding manure. They will rot down to a third of your finishing height, so you need to keep piling on material until it’s practically impossible. They won’t look pretty and so you may be tempted to hide them away but they still need to be accessible. 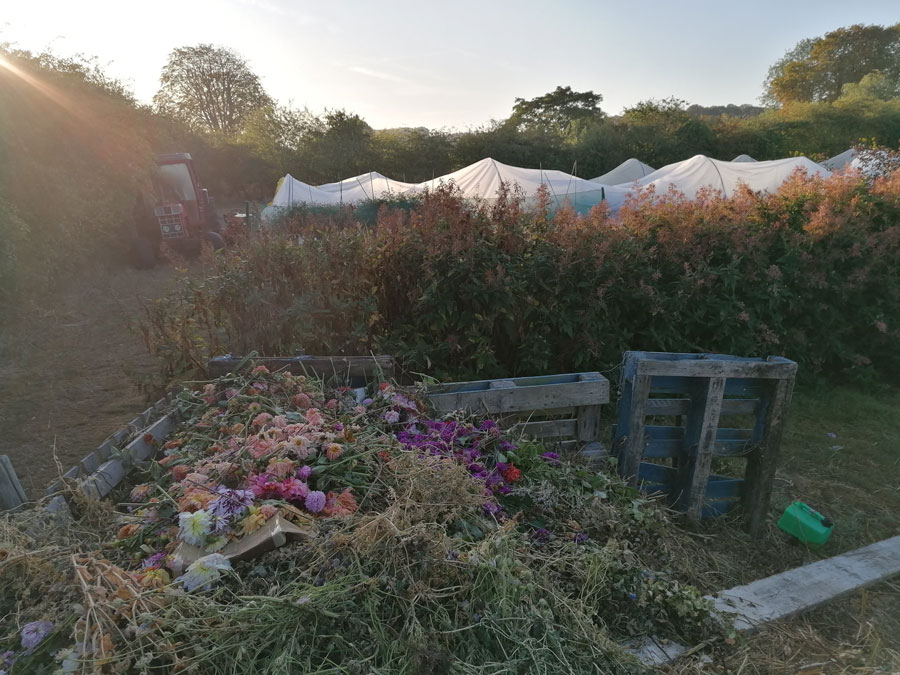 And so at this point of the year, once all that is done you can start to take a breather, unless you haven’t tackled the dahlias of course which has not been easy during this wet autumn.